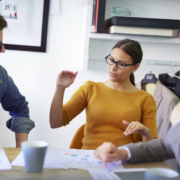 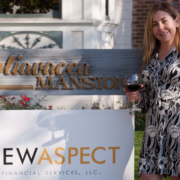 Despite challenges posed by the ongoing trade war with China, along with wildfires and other climate change related problems, the Napa Valley, California, area had been doing just fine for the most part thanks to the strong tourism industry driven by local wineries, according to Karin Alvarado, a managing partner and financial advisor at boutique hybrid financial services firm New Aspect Financial Services.

But then came the COVID-19 pandemic, noted the advisor, an immigrant from Mexico City, who has been an independent advisor since 2010 and who helped Napa-based New Aspect, a firm with about $450 million in assets under management, spin off from Stark Miller Financial Benefits Group.
“There has been zero tourism” in the area since California locked down in March, she told ThinkAdvisor, adding: “Literally, our Valley went from thriving one day to ghost town and crickets. The wineries closed. The restaurants closed. All businesses closed.”

Although businesses were “starting to reopen slowly,” including some restaurants, that did not yet include wineries when ThinkAdvisor interviewed her by phone in early June. People were afraid to travel, so many tourists canceled trips to Napa Valley, she said. The wineries are the big tourism draw in Napa, she noted, calling it “the Adult Disneyland.”
Pointing out that her firm, affiliated with Advisor Group’s Woodbury Financial Services on both the broker-dealer and RIA sides, specializes in retirement planning, she noted that it serves 55 businesses throughout Napa Valley and the Northern California area. Her firm also has a private wealth management operation that serves about 200 households. Both sides of her firm’s business have been affected by the pandemic, she said.

Of the 55 business clients, about 80% were affected in some way, including her nearly 20 winery clients, she said, adding her firm also has as clients seven nonprofit organizations that have been hit hard by COVID-19.

One of the largest wineries her firm serves especially impacted by the pandemic, she said, noting it has about 270 employees and has been a client of hers for about 10 year

The owner, who is in his late 60s, contacted the firm “very stressed out in early April,” asking why there was no stop-loss solution in 401(k) plans, she recalled, noting his wife is also a personal client of her firm.

“We were able to sit down and have several conversations” with him in which she pointed out the retirement plans his company used for its staff couldn’t have stop-loss solutions because they are employee-directed plans, she said.

“The main concern was that he was about to make a significant profit share contribution in April for all of his workers and everybody looks forward to this because we’re talking about a $30 million plan and a significant amount of money goes in each year as a profit share,” she pointed out. Noting those employees include grape growers, grape pickers and cellar workers, she said: “This is their life savings” in question.

The winery owner was “extremely concerned” about what was happening with the stock market amid the pandemic and “he did not want to make the profit share at this time — he was very uncomfortable” doing that, she said. However, over the course of several conversations, she explained to him that during prior pandemics, the market has rebounded, noting: “We were able to soothe down his fears and happy to report that just recently the profit share was funded.”

Preventing Layoffs at a Nonprofit

Alvarado pointed to two of her firm’s longtime nonprofit clients that are fully funded via the government and donations, and didn’t have much savings to cover 2-3 months of payroll.

Her firm helped by providing one of them, a foster care facility in Napa, with “some advanced plan design” for its retirement strategies in order to “suspend their retirement plan liability within the first two weeks,” she said. That organization had some furloughs, but was able to retain most of its staff, she added.

She connected the other nonprofit client, which helps underserved families in Oakland, California, with a lender and it received a Payroll Protection Program loan. As a result, she said: “They’ve been able to retain all of their therapists” and other staff.

Helping a Client Retire on Schedule

One of her individual clients, meanwhile, scheduled a retirement party for March 28, right after his official retirement was to go into effect, she recalled. Her firm has been managing his firm’s 401(k) plan for several years and was also helping him and his partner with personal retirement planning, she noted.

He was a “ball of stress” because the pandemic started that month, she pointed out. “We had to remind him that our planning philosophy was specifically in place to address these types of situations and that he had nothing to worry about,” she recalled, adding: “He was obviously scared to retire” due to what was happening with the stock market amid the pandemic.

But with her firm’s advice, the client, a 62-year-old man who co-owned one of the largest landscaping companies in the Northern Bay Area, went through with the retirement as planned, his portfolio is up now and he is “loving retirement,” she said, noting he was one of the firm’s seven owners and somebody else replaced him as a co-owner.

“We were very fortunate in that prior to that we had already started our financial plan and so we had most of the money in safety and we just got lucky, honestly,” she recalled, conceding: “It was not by any means that we know how to time the market. But we had moved everything into safety and were waiting to transfer his account. So the worst of it happened while he was out of the market. And then, when we got him back in, the worst was pretty much over.”

However, she recalled, back in March, “he would call every single day, changing his mind as to whether he would change his retirement date” and wanting to make sure her firm factored in everything.

Adding a wrinkle to his case was the fact that he was retiring before he could collect Medicare, she recalled, explaining: “We had already created a bridge strategy for him to get him to retirement, to Medicare…. And he had some medical issues. So that was a big concern for him.”

But “we’re still waiting to have the party,” she said, noting it couldn’t be held yet because of the state’s pandemic orders.

In all, about 70% of her firm’s private clients have been affected financially by the virus, she said, noting many of them are pre-retirees in the 55-to-65 age range.

“I’ve had call after call with clients that can’t make a life insurance payment,” she said, noting a lot of that communication with clients has been done via video conferencing, which even her oldest clients have become increasingly comfortable with.

Despite the stress among many clients, at least initially, they are all in diversified portfolios and haven’t been impacted much, she said. Younger clients took more of a hit initially, but they’ve seen upticks since then, she noted. Perhaps surprisingly, “nobody’s made any changes to their portfolios,” she said.

Fortunately, not many of her clients have lost their jobs as a result of the pandemic and she was aware of none that had contracted the virus, she said, noting free testing was provided early in her region.

Of her firm’s 19 client wineries, almost 90% were able to get PPP loans, she told ThinkAdvisor. Only a small number of her winery clients were potentially in danger of not making it as a result of the pandemic, she said. As of the time of our interview, the wineries were still waiting to open their doors again, she said.

However, she told ThinkAdvisor on Thursday: “In the last week we have started to get announcements from wineries announcing their reopening. I had several clients open this week and some that will open in the following weeks. Most are accommodating an outdoor area for guests to sit and taste and everything is by appointment only. So although Napa is no longer a complete ghost town, it will take some time to get to the thriving community we once were. Aside from the wineries, I still see many businesses closed.” 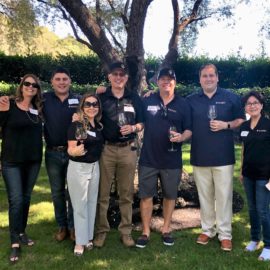 Thank you, everyone, for joining us on October 13th for our 4th Annual Client Appreciation Event! Woohoo! The music, the schwag, the food, and the company couldn’t have come together any better. Thank you again for your continued trust in our services to help drive your future success.  Cheers! 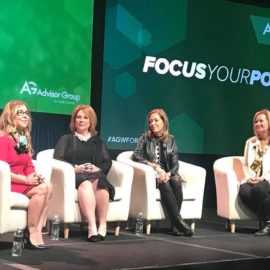 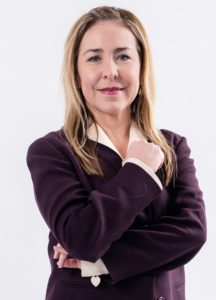 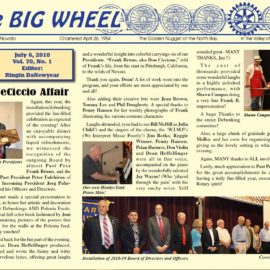 Shawn Campas, CPFA of New Aspect Financial Services, LLC serves on the board of directors as the Director of Youth Services. Read the full newsletter–>Novato Rotary June 2018 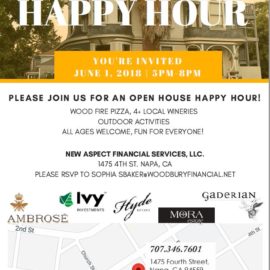 A very warm thank you to everyone who joined us for our Happy Hour event last Friday! As always,we had a great time and it was wonderful gather with our amazing clients and friends to kick off the Summer. Thank you to our wine vendors: Hyde Vineyards, Chiron Wines, Mora Estate, Gaderian, and Ambrose.

We hope to see you all again at our next event!

Thank you and cheers from New Aspect Financial Services, LLC. 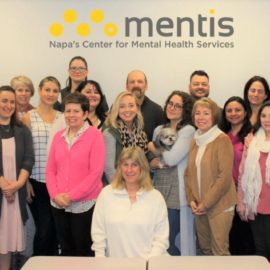 Mentis is dedicated to the emotional health and wellbeing of all Napa County residents, Mentis provides bi-lingual, affordable mental health services to people of every age, stage, and income level. Shawn Campas of New Aspect Financial Services, LLC- featured Mentis in the latest summer issue of Napa Valley Life Magazine because of the dedication to support of Napa residents with the mental health needs. What a great feature on an amazing organization in the Napa Valley. Click the following link to read the full article: NewAspect-Mentis 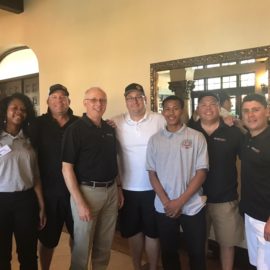 On Monday June 5th, New Aspect Financial Services LLC. supported a local charity at the 14th Annual Last Mile Foundation Golf Classic by sponsoring holes at the event. The Last Mile Foundation and Alive & Free, help to provide scholarships and education to those in need.
Here are some pictures we took of us supporting the event with out sponsored hole, team members, and event brochure. 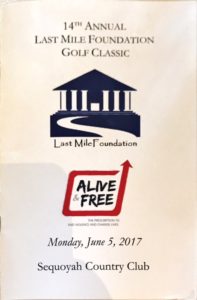 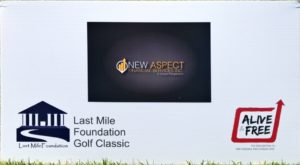 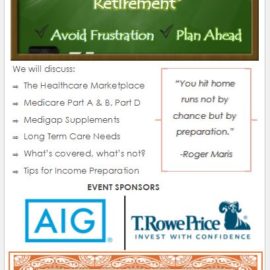 If you are interested in learning about how to plan for “Healthcare in Retirement” RSVP to this event. Seats are limited and filling fast so don’t miss your chance to get valuable information for your future.

To learn more about the professional history of our financial advisor(s), please visit brokercheck.finra.org